I am proud to join Professors Danielle Boaz (UNC Charlotte) and Youssef Carter (UNC Chapel Hill) as co-principal investigator in a multi-year project, funded by the Religion and Theology Program of the Henry Luce Foundation, that amplifies community efforts to prevent discrimination and violence against practitioners of Africana religions. The first stage will engage practitioners of African ancestral religions such as Lucumí (Santeria), Candomblé, Obeah, … END_OF_DOCUMENT_TOKEN_TO_BE_REPLACED 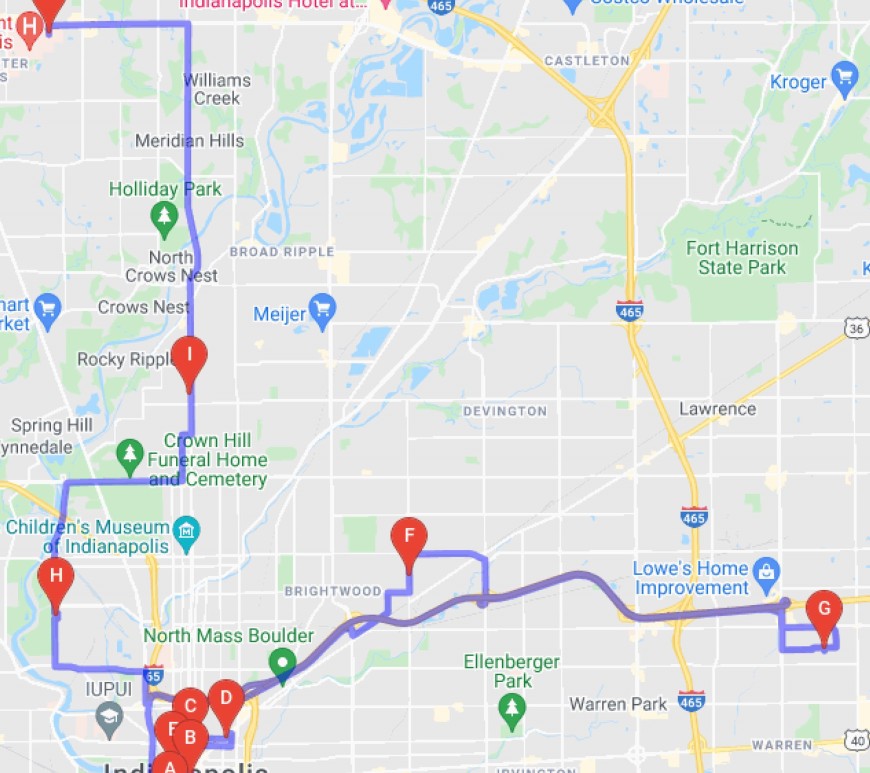 Take a Self-Guided Tour of the Sites along the Arab Indianapolis Heritage Trail! Click on this link to Clio.Com. The Arab Indianapolis Heritage Trail there will give you directions to each stop along the route and tell you why the site is important. It is possible to walk from the Historic Syrian Quarter to Monument Circle, the Indiana War Memorials, Mass Ave, and the Indiana … END_OF_DOCUMENT_TOKEN_TO_BE_REPLACED

The American Midwest is often thought of as uniformly white, and shaped exclusively by Christian values. However, this view of the region as an unvarying landscape fails to consider a significant community at its very heart. Muslims of the Heartland uncovers the long history of Muslims in a part of the country where many readers would not expect to find them. Edward E. Curtis IV, … END_OF_DOCUMENT_TOKEN_TO_BE_REPLACED

It was a busy and fun Arab American Heritage Month for me. I tweeted @EdwardECurtisIV every day of the month about Arab Americans in Indianapolis and other parts of the state. Among the highlights were two original maps charting the growth of Syrian-owned grocery stores from 1915 to 1940 designed by Jeffrey Wilson, professor of geography and Associate Dean for Research at the IU School … END_OF_DOCUMENT_TOKEN_TO_BE_REPLACED

After a decade of work to create a viable journal devoted to the study of religion in Africa and the African diaspora, I told my board last week that I was ready to step down. It is a good time for me to do so since the journal is in an incredibly strong position. In addition to co-founder Sylvester Johnson, its editorial team now includes … END_OF_DOCUMENT_TOKEN_TO_BE_REPLACED

It was so much fun to work with Vinnie Manganello, chromapros.com, on the trailer for ArabIndianapolis.Com, my community history project on the contributions of Arab Americans to Greater Indianapolis. IUPUI Honors student Mickey Yoder and Prof. Paul Mullins provided invaluable assistance on the historical content for the piece. We shot the stand-ups on a Sunday morning and then finished the voice-overs later. I found the … END_OF_DOCUMENT_TOKEN_TO_BE_REPLACED

Joy supreme has reigned in the Syrian colony on Willard Street since 3 o’clock on Wednesday morning when David Freije hugged to his breast for the first time in eight years his wife Martha and their seven year old daughter Salomey, whom he had never seen before. Indianapolis Morning Star (1905) It took all of grocer David Freije’s hard-earned $400 in savings, the equivalent of … END_OF_DOCUMENT_TOKEN_TO_BE_REPLACED

Originally published in Mondoweiss, January 14, 2020: The “usual suspects” are already being rounded up. U.S. citizens with Iranian names and backgrounds are being selected for special screening at the border. City police departments in New York and Los Angeles have vowed to be on alert for Iranian terrorists. It’s been the same story for decades. Nearly anytime the United States has a military conflict … END_OF_DOCUMENT_TOKEN_TO_BE_REPLACED

Today I received my very first copy of Muslim American Politics and the Future of US Democracy. It is always a thrill to receive the actual book. This book is the culmination of my thinking since 9/11 about the central importance of Muslim Americans to the political future of the United States. I admit that the book is a jeremiad, a lament about the country’s … END_OF_DOCUMENT_TOKEN_TO_BE_REPLACED

Indianapolis, IN — Three-dimensional images of a Fruit of Islam uniform and Muslim Girls Training headwear from the 1970s are just a few of the thousand-plus unique items in the Indianapolis Imam Warith Deen Muhammad Community digital archive now available to anyone with an internet connection. Fruit of Islam Jacket by IUPUI Center for Digital Scholarship on Sketchfab Curated by the IUPUI Center for Digital … END_OF_DOCUMENT_TOKEN_TO_BE_REPLACED